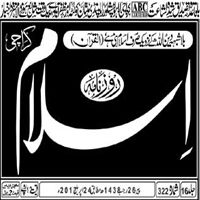 Daily Islam Karachi is publishing across the Nation in various cities including Karachi, Lahore, Peshawar, Rawalpindi, Quetta, Multan and Muzaferabad. It is National Newspaper of Pakistan. This newspaper is ABC certified and has vision of transporting new with Maturity, honesty and factually. Daily Islam Newspaper has healthier number of Readership is their Islamic Views that are presented in their newspaper on daily basis. This Newspaper has all the updates, news, stories of which a reader is searching for, online webpage of daily Islam provides latest News, headlines, National and International News, regional news, stories on different issues or problems and many other that are published inprint newspaper, It is also provides access to magazine so that they can easily be searched and read online. Two magazines are published in a week for one of them is Bachon ka Islam Magazine which is published on Friday Another is Khawateen ka Islam Magazine which provides religious information, values of Islamic system and another relevant material to the women's and Girls of society. For Those Who Want to Read Daily Islam Karachi They Can Visit It's Official Website: www.dailyislam.pk. At The Website You Will Find Daily Islam Too. You Are Visiting Daily Islam Page of Epaper.PkNewspapers.com.

Geo News in English was an English-language television channel in Pakistan owned by the Geo TV network. Until it was scrapped in late October 2008, it was running its test transmission internally in Karachi. Its last bulletin ran on October 23, 2008. Several employees were laid off as a result. The global financial crisis was cited as the reason for the shelving of the Geo English project. The channel was relaunched but replaced later with GEO Tez in 2013. Geo Television Network started out with its flagship channel Geo TV in May 2002, but has since launched several other channels which include the following: GEO Entertainment, GEO News, GEO Kahani, GEO Super (Sports) and GEO Tez (Comedy). Geo News is No. 1 News Channel of Pakistan. You Can Watch Geo News Live Streaming at Geo News. You Are Visiting GEO News Page of Epaper.PkNewspapers.com For Geo News Online Edition Latest Headlines, Blog, Sports, Entertainment, Trade, Business, Beauty, Fashion, Health, Classified Ads, World and Pakistan News, GEO Dost, GEO International, Articles and Columns.

Daily Dharti AJK is One of The Most Popular Urdu Newspaper of Pakistan Publishing Daily Form Rawlakot, Azad Jamu and Kashmir. It is popular ABC urdu newspaper. Daily Dharti is an Urdu Language Daily Newspaper. Daily Dharti is The Largest circulated Newspaper of Azad Kashmir. Roznama Dharti Can be purchased by Spending Only 10 Pakistani Rupees. For Those Who Want to Read Dharti ePaper They Can Visit It's Official Website: www.dailydhartiajk.com. At The Website You Will Find Daily Dharti Old Newspapers Too. You Are Visiting Dharti Akhbar Page of Epaper.PkNewspapers.com.

Daily Taqat is published from Karachi, Lahore, Islamabad, Rawalpindi, Peshawar, Quetta, Muzafrabad, Bahawalpur, Faisalabad, Gujranwala, Sialkot and also from UK and U.A.E. Daily Taqat ePaper is an urdu daily newspaper. The newspaper gives all latest news from all cities in the country. It is an Urdu daily publication and is printed in Pakistan and abroad. It has various editions including Karachi, Lahore, and Islamabad. It is a Publication of Azam Media Group. Chief Editor of Daily Taqat is Rahmat Ali Razi. It is ABC Certified and Member of APNS and CPNE. It has 8 pages and Cost is 8 Pkr.
For Those Who Want to Read Taqat ePaper They Can Visit It's Official Website: www.dailytaqat.com. At The Website You Will Find Daily Taqat Old Newspapers Too. You Are Visiting Taqat Akhbar Page of Epaper.PkNewspapers.com.

Daily Bang e Sahar is published from Gilgit Baltistan. It is an ABC certified newspaper. Daily Bang e Sahar is a popular Urdu Newspaper of Gilgit Baltistan. Editor in Chief of Daily Bang e Sahar is D.J Mithal. Bang-e-Sahar started its publication in the form of a monthly magazine from Karachi. The fearless and bold policies of the magazine unearthed an endless tale of bulldozing of basic human rights, massive corruption and financial embezzlements and ruthless bloodshed in the name of either religious beliefs or an assumed and self invented fake national identity. These achievements made the magazine a widely read and people termed it their sole representative but applauds and embracing from the largest segment of the society invited the wrath of a small but powerful segment well known as the establishment. It has Four pages and you can purchase This newspaper by spending 5 Rupees. For Those Who Want to Read Daily Bang e Sahar They Can Visit It's Official Website: www.dailybangesahar.com. At The Website You Will Find Daily Bang e Sahar Old Newspapers Too. You Are Visiting Daily Bang e Sahar Page of Epaper.PkNewspapers.com.

Daily Baidar is One of The Most Popular Urdu Newspaper of Pakistan Publishing Daily Form Gilgit Baltistan. It is popular ABC urdu newspaper. Daily Baidar is an Urdu Language Daily Newspaper. Daily Baidar provide Latest news, breaking news, National, International, Politics, Sports, Business and Other News. Roznama Baidar Akhbar Can be purchased by Spending Only 5 Pakistani Rupees. It has Four pages. For Those Who Want to Read Daily Baidar ePaper They Can Visit It's Official Website: www.dailybaidar.com. At The Website You Will Find Daily Baidar Old Newspapers Too. You Are Visiting Daily Baidar Akhbar Page of Epaper.PkNewspapers.com. Chief Editor: Meer Aslam Hussain Sahar
Editor: Jafar Ali
Managing Editor: Sajjad Hussain

Daily Chattan is published from Srinagar Jammu & Kashmir. It is Established before 32 Years. It is the largest read Newspaper of Jammu and Kashmeer State. Daily Chattan Can be purchased by Spending Only 3 Pakistani Rupees. This newspaper based on 8 pages. It is provide Latest, Breaking News, National, International, Politics, Sports, Business, Entertainment and Showbiz News. For Those Who Want to Read Daily Chattan ePaper They Can Visit It's Official Website: www.chattanonline.com. At The Website You Will Find Daily Chattan Old Newspapers Too. You Are Visiting Daily Chattan Page of Epaper.PkNewspapers.com.
Daily Chattan Contact: Printer publisher owner: Tahir Mohi-ud-din
Editor: Tahir Mohi-ud-din
Executive Editor: Farooq Ahmad
Associate Editor: Hamid Salik
Assistant Editor: Dr. G.M Bhat

Daily Awami Awaz is a Sindhi newspaper which publishes from Karachi, Pakistan. The Editor in Chief of newspaper is Dr. Abdul Jabbar Khattak and Dr. Khair Mohammad Juno. It circulates in all region of Sindh. It serves to a large number of people living in Sindh who do not know other language. It also publishes online newspaper for the ease of people.
Awami Awaz News Paper has many portions include local, international current affairs, entertainment, talk shows, political cartoons section and much more. Newspaper also contains magazine section in which many famous Sindhi journalists write columns and blogs. For Those Who Want to Read Daily Awami Awaz ePaper They Can Visit It's Official Website: www.awamiawaz.com. At The Website You Will Find Daily Awami Awaz Old Newspapers Too. You Are Visiting Daily Awami Awaz Page of Epaper.PkNewspapers.com.

Daily Azadi Swat published from Pakistan. Azadi Swat is a daily Urdu publication with various regional editions. It has various editions including Karachi, Peshawar and Islamabad. You can read latest news updates on politics, national, international, sports and entertainment news from Pakistan. It is an ABC certified Urdu Newspaper and member of APNS and CPNE. Mumtaz Ahmad Sadiq id chief editor of Daily Azadi Sawat Newspaper. It has 8 pages and you can purchase in 9 PKR. For Those Who Want to Read Daily Azadi Swat ePaper They Can Visit It's Official Website: www.dailyazadisawat.com. At The Website You Will Find Daily Azadi Swat Old Newspapers Too. You Are Visiting Daily Azadi Swat Page of Epaper.PkNewspapers.com.

Daily Ausaf Gilgit is publishing Gilgit Baltistan. Ausaf group has launched this newspaper for the people of Gilgit Baltistan to know what is happening around them. This newspaper not only publish news about Gilgit but also gives information about daily news and current affairs in other cities of Pakistan.
This newspaper can easily be purchased from Gilgit but for those people who want to read it online Ausaf has launched it's electronic version too known as Daily Ausaf Gilgit ePaper.. You are visiting the same newspaper for Daily Gilgit News and Columns.
If you want to read main Daily Ausaf ePaper then click the link given below:
Daily Ausaf

Daily Ausaf Islamabad is published from Islamabad Pakistan. It is an Urdu Language International Newspaper. Daily Ausaf newspaper was founded on 25th of December 1997 from the Islamabad. Daily Ausaf owned by Ausaf Group of Newspaper. It contains 16 pages and available at the price of 13 Pakistani Rupees.
Roznama Ausaf Islamabad has developed rapidly and broadens the area of its publishing just in few year as it published its international edition on December 22, 2001 from Frankfurt the city of United Kingdom. It's current chief editor Mehtab Khan is the key person to develop and maintain the trust of readers.
If you don't want to buy its paper edition or you live in the place where you don't have access to print edition of Ausaf Newspaper even then you can easily read it by goiing to its official website dailyausaf.com. You Are Visiting Daily Ausaf Islamabad Page for reading Ausaf Islamabad Newspaper online at Epaper.PkNewspapers.com/daily-ausaf-islamabad.html.
If you want to read Ausaf Lahore or Ausaf Gilgit Baltistan editions you can visit by clicking on the links given below:
Daily Ausaf Lahore
Daily Ausaf Karachi